It’s last report about my persian journey. Well from Khuzestan ostan my direction was North-West and Ilam state. 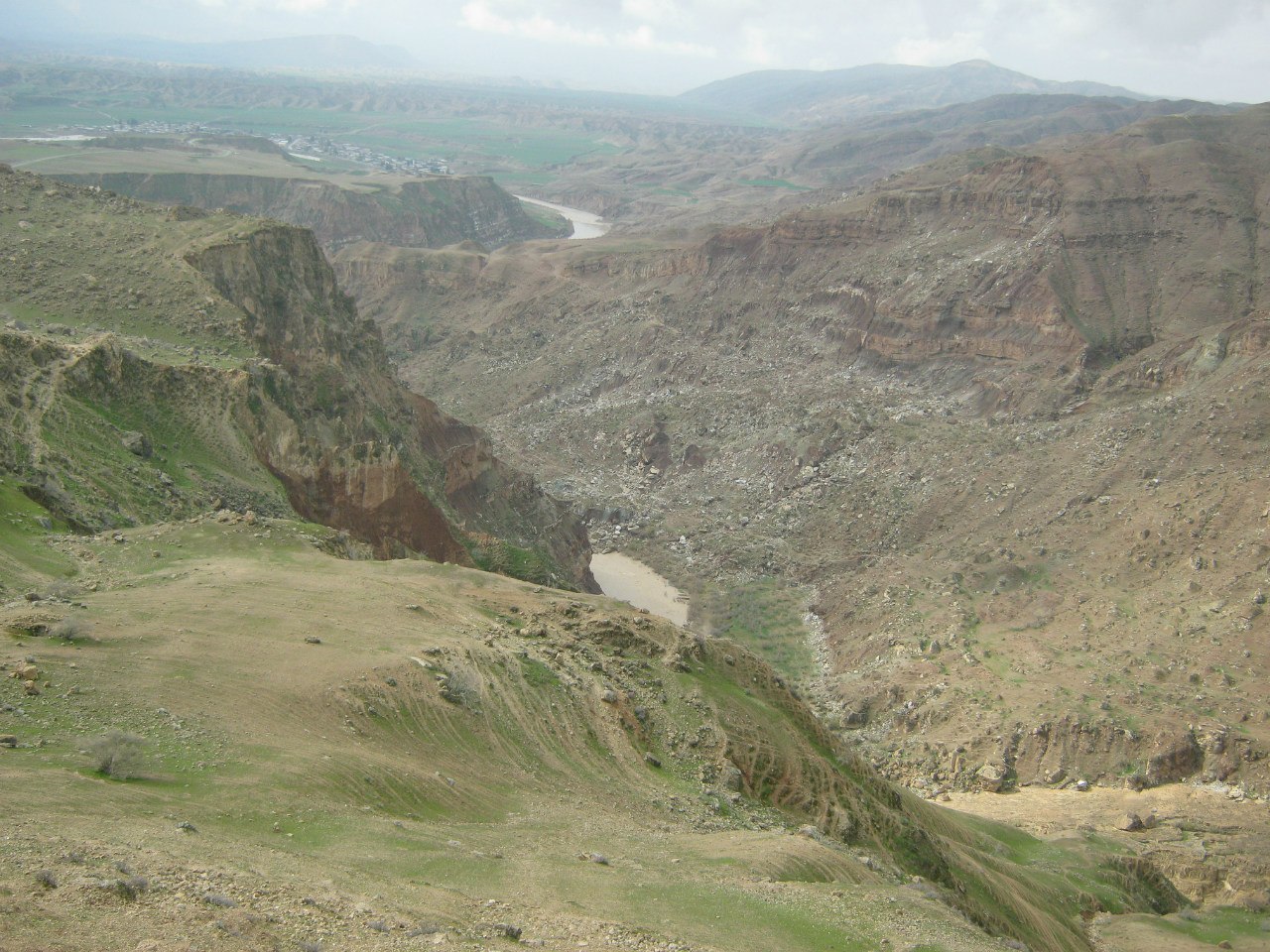 I found this landscape on the way from Dezful to Darreh Shahr. It was mainly cloudly.

* Darreh Shahr. It’s are small town at Ilam province. Here is some ancient ruins and small museum. In evening i came to internet cafe for use computer. After 20 minutes to that cafe came 3 policemens.

Without any questions they tell me «Go with us» and carry me to out and put to car. They not allow me bring my bag by myself. One policemen brought it and put to trunk. We arrive to police station (or more chances it was army structure). They totally check my bag, from bottom to up, check every pocket, and didn’t find there any criminal.

Another policeman continue stay at internet cafe and check my e-mail. After about 1 hour he come to us in police station, and says «Ok, no problem with your e-mail!».
And after that they told me «Ok. No problem!. You can go where ever do you want».
But … i need place for stay that night … and policemens provide me warm and clean place under the roof at picnic area (near small waterfall) at 6 km from city. And they give me many food and fruits also for the next day. More details about this expirience and Ilam province i explain at page on russian language. 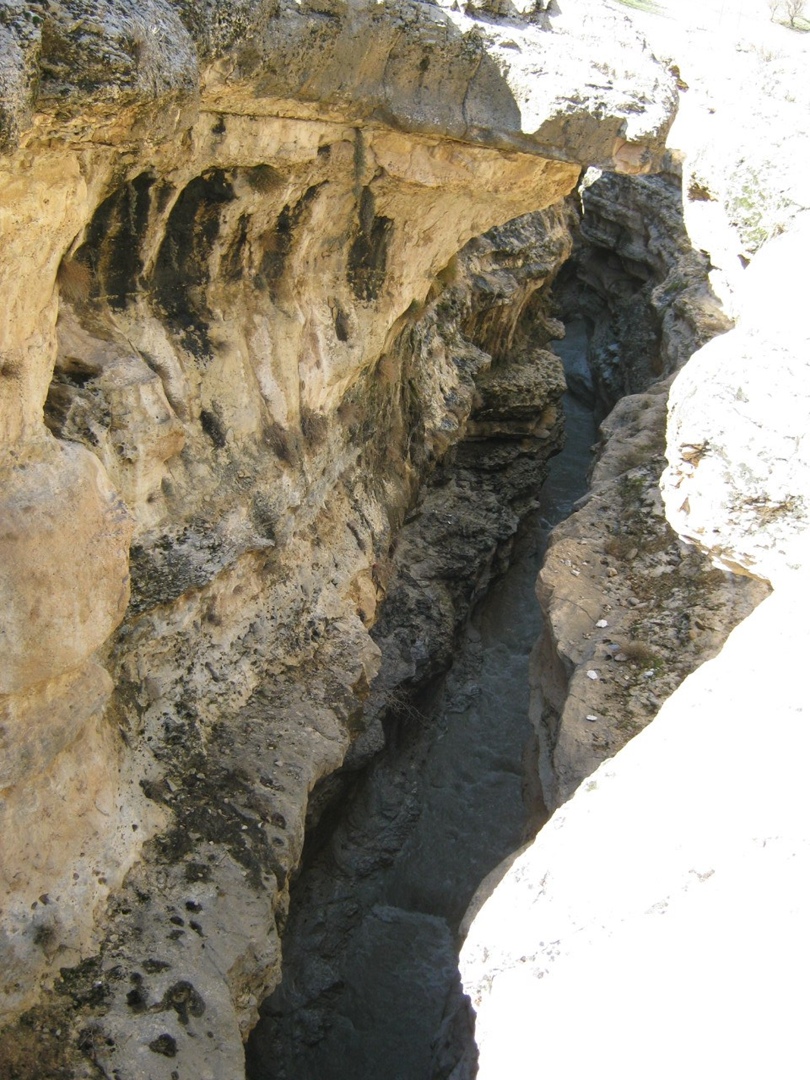 A small canyon (deep about 30 meters, and wide in medium about 1-2 meters). When i saw this wonder on the way from Darreh Shahr to Ilam immediately I came out from the lifting car and walk along this canyon just above it. Total lenght of this gorge are 1 km.

* Ilam. Small city (and capital of Ilam province) populated by kurdish peoples. It was first kurdish ostan on my way around Iran.

I stay here at Ilam town just 1 night (one local invite me to his home) and moved to N-E about 160 km.

* Kermanshah. 850 000 peoples live here. Biggest kurdish city in Iran and the capital of Kermanshah province. Some historical places has in city and around. I stay here almost 4 days. More informative about Kermanshah ostan (and with adding info about religions at Iran) traditionally on russian. 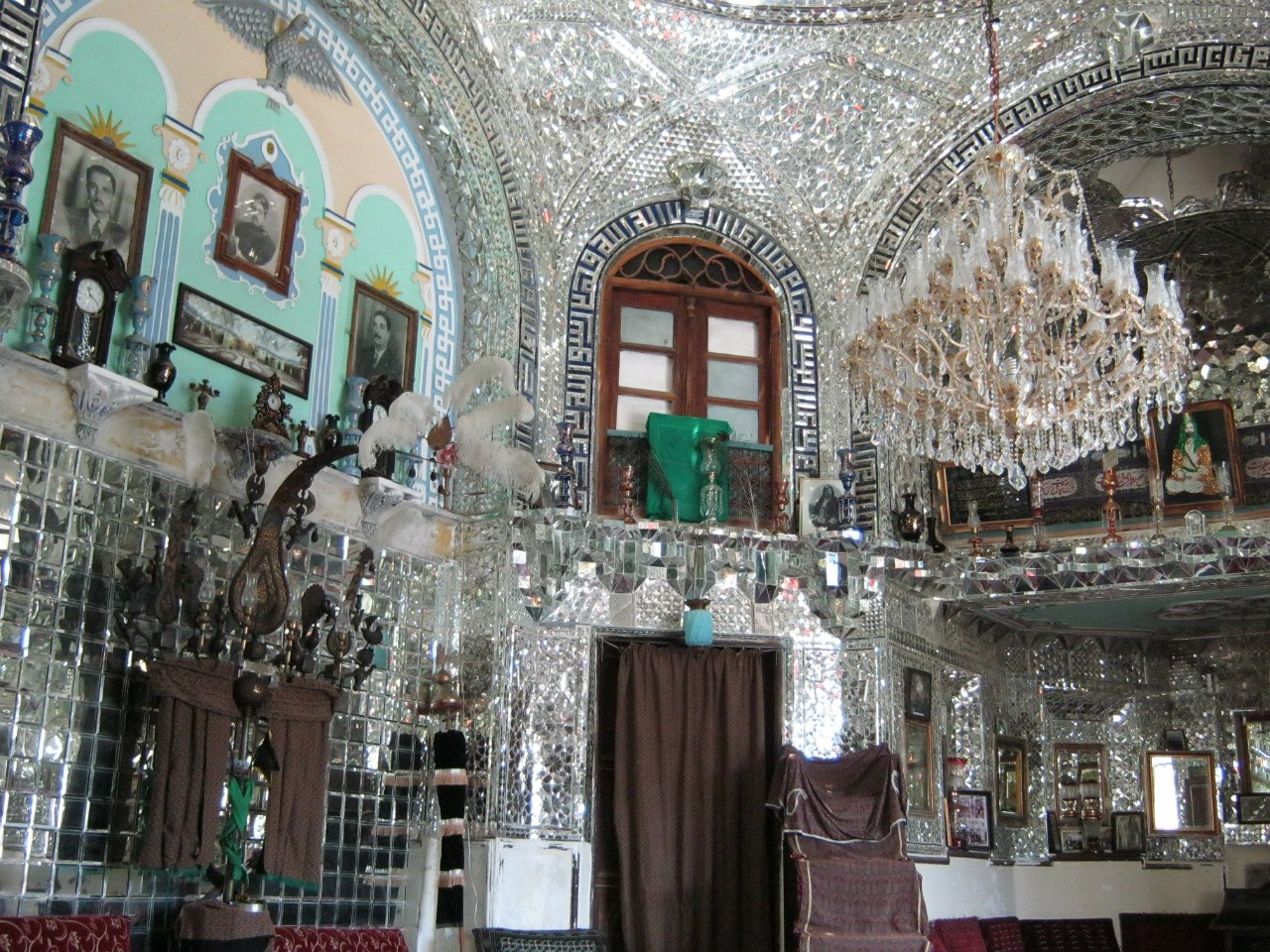 Now it’s part of the museum at Kermanshah city, but earlier it was some kind of Husseiniye (place for singing songs for Ali Husseyn).

* Quri Qaleh cave. There is cave but not very crouded by stalactites.

* Sanandaj. Capital of Kordestan province. Yes officially in Iran it called just Kordestan, not Kurdistan. It’s one of 3 provinces, populated mostly by kurdish peoples (90% of all population). All that provinces close to Iraq border.

And i can say that kurdish peoples in Iran was most friendly and hopsitable peoples where i been in Iran (i been at about 60% of provinces). During 11 days in kurdish area i have ben invited about 10 times just from streets (or from cafe or like that) by locals to their houses. That invitations i got in cities and villages, from drivers and from walkers.

And because that time i have limited time i accept just some of invitations. Also i got some other offerings of another help (food, fruits and else) from several kurdish peoples. How i guess similar level of hospitality has in neighbour province of Lurestan (it’s not kurdish ostan).

Always anywhere in every country usually (for 99,9% cases) most hospitable peoples live in mountains areas and villages — as possible far from very crouded cities. But anyways life is life and i want say that «All peoples and other things are good. But we want divide them on good and bad patrs.» 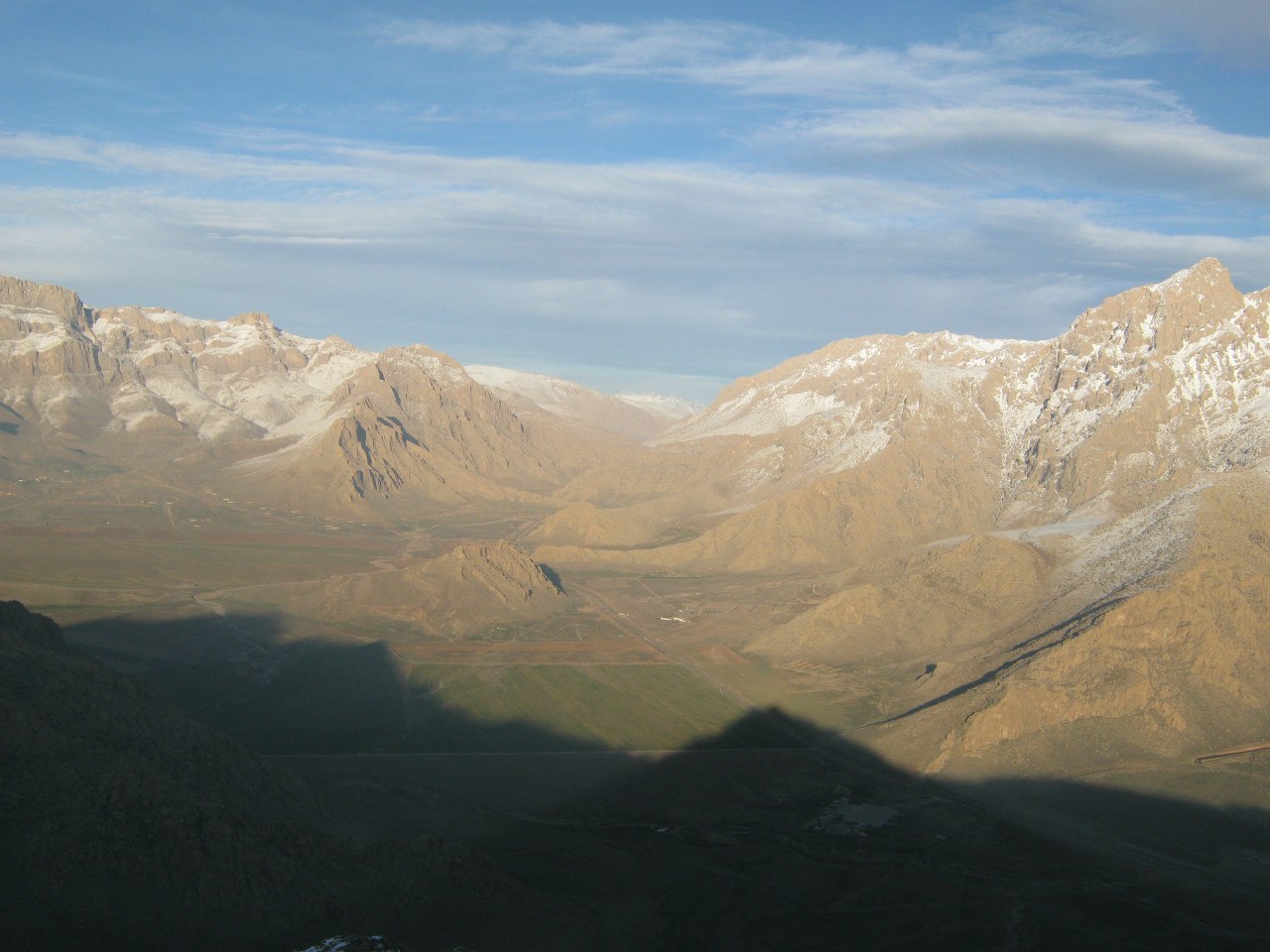 Above the Kermanshah city. I climbed to this mountain from the park which is near to Taq-e Bostan (an ancient relief carved in the rock). In this Kermashah city and around it i took much more pictures than at Sanandaj.

At Sanandaj i stay 3 nights and full 2 days. At last day i observe iranian Independent Day — 10 of February.
It seems like a demonstrations in Soviet Union during communist rejime. Many peoples obligatory go to this ceremony because they have job in govermental offices and schools. I don’t take any picture there becuase there have too much soldiers, snipers, watchmans — they stay along the streets and on the roofs. Always it was interesting. As well available report by russian about iranian Kordestan. 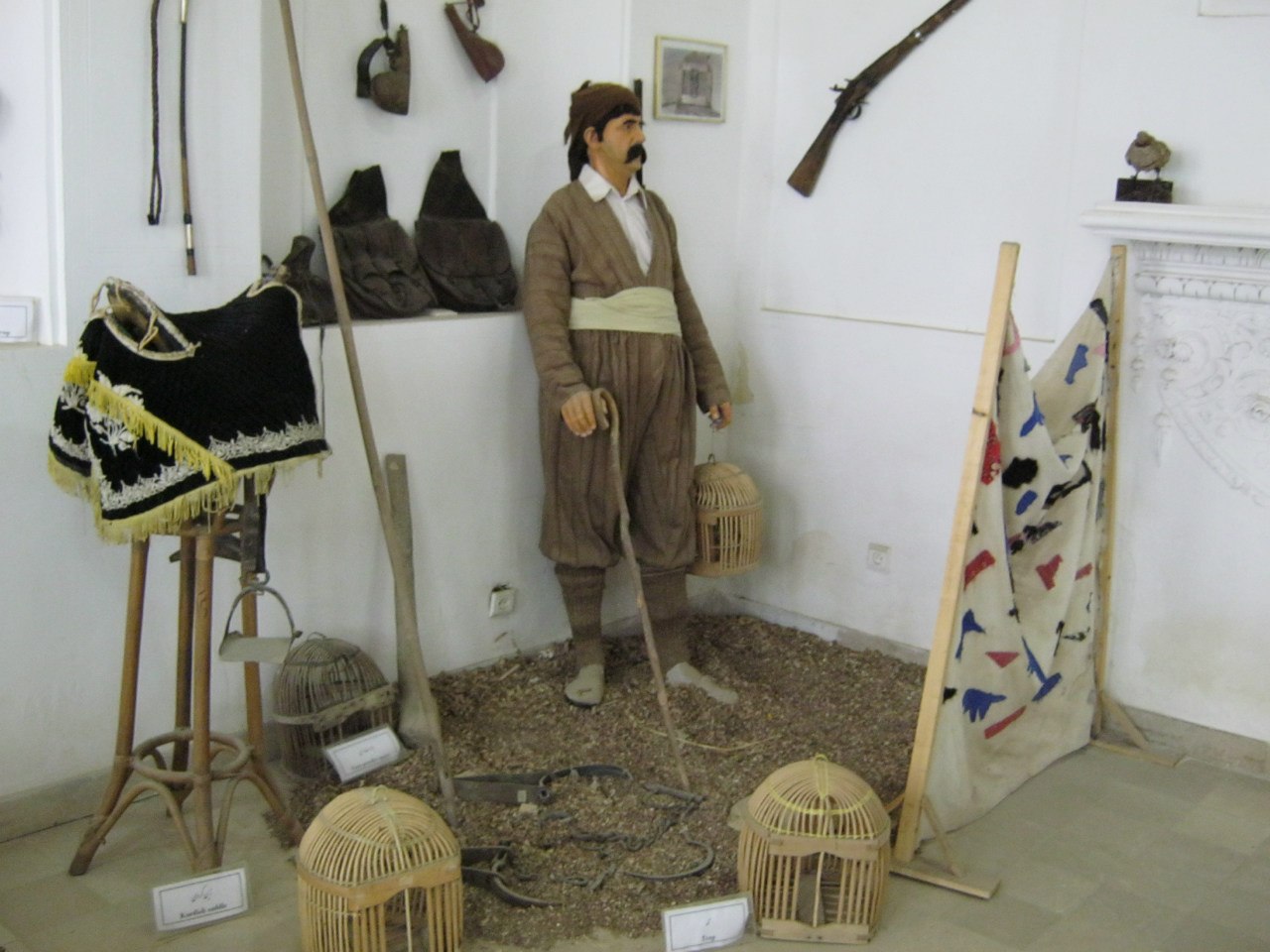 Traditional shape of kurdish hunter and his instruments. It’s at the museum of Kermanshah city. At the down right corner there is a stand whch used during hunting as camouflage.

After Sanandaj going to West for 120 km to…

Marivan city and 15 km from there i tryed to cross border and enter to Iraqi Kurdistan. But they don’t allowed me to do that — because they not issue visa on the border (althugh i hope for that).

Saqqez city. Night got me here and i stay night and then moved to North-West for about 270 km (via Urumiye=Urmia) to Esendere village which on the border of Turkey. I leave Iran at last day which was allowed (totally travelled there for 3 months non-stop, two times i extend vosa). Well Iran it’s interesting country, very beautiful landscapes, multy-cultural, in general people are enough hospitable.

As well available inks for all other my pages about Iran or other things on english language.