This text firstly was written by myself, then edited by professional editor and after that published at one website. Now i decide to use it for my own website and as well little edit it with some additions. For example i added few links to my pages of some corresponding topics about which sayed at this present text. But that pages on russian language!

Also, i wrote similar text about desicion for traveling.

Well my body was born in 1974 at the Ufa city of the Soviet Union (now it’s within Russia). I could not say with certainty when exactly my soul was born, who knows, it might be older than the body. Next 26 years I lived a «normal standard» life: school, college, job of building. I could describe that standard way of life as working and making our world more and more occupied by technological and industrial products and less nature.

But since January of 2001, I went through a big change in my life. I lost (almost) all interest for earning money and started to study about religions and some spiritual teachings. After few years adopted a philosophy, which is near to Advaita (or non-duality). It’s almost Buddhism but without rituals. I respect all religions, traditions and alternative opinions. 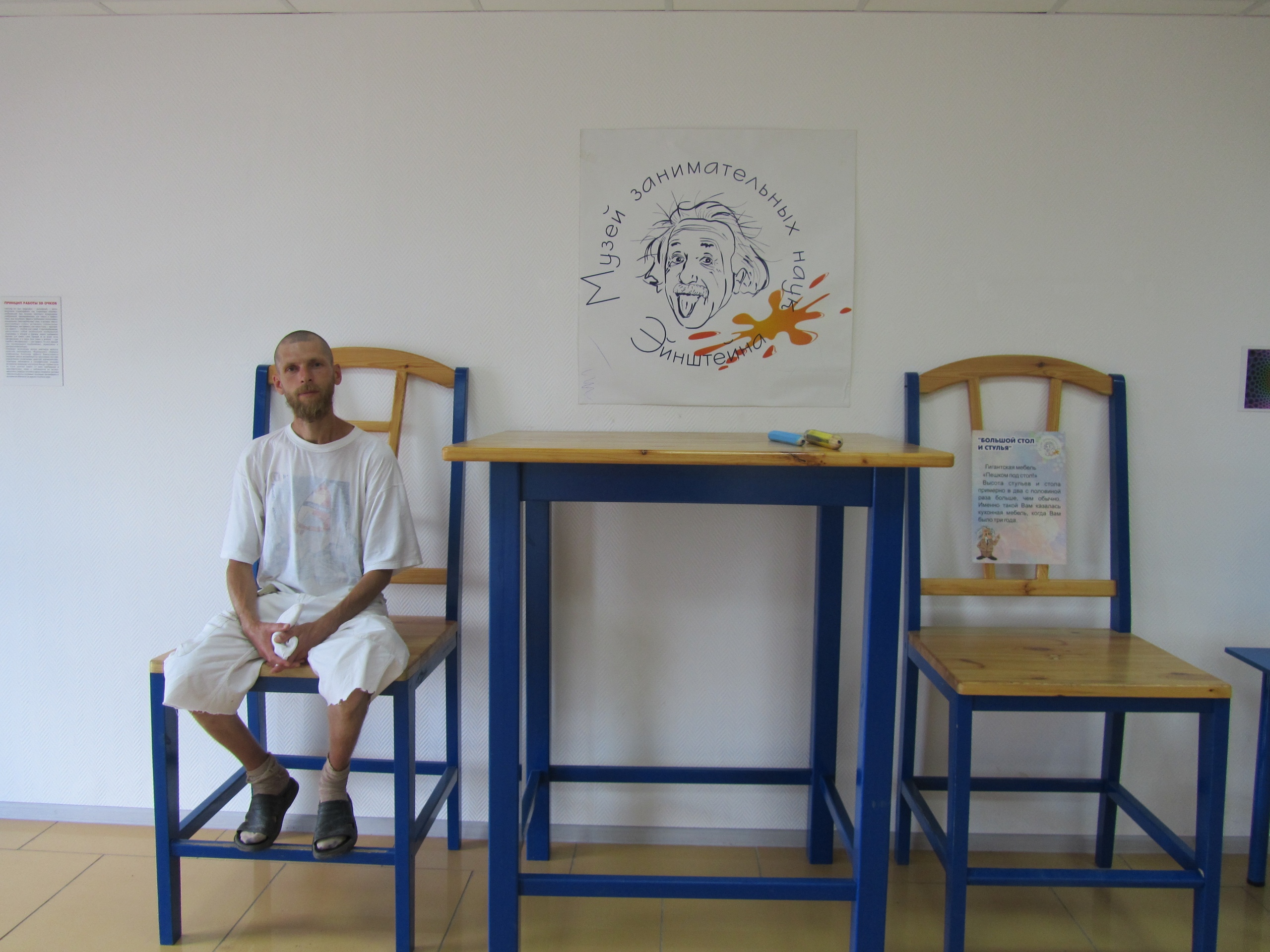 This picture with me was made at the «Science museum» at Komi republic of Russia. In my opinion, it says that almost everything in our world seems some different than in reality, and we should compare it with otger things.

I had to go, new life was calling

Exploring places was something that always interested me. Even as a child I used to go on these endless walks throughout my city. As soon as I could I started taking bike rides all around, so I would explore even further. I studied a lot about geography. I loved watching the paper maps and analyzing territories, cities, rivers, mountains, and their locations. Reading books about geopolitics was one of my hobbies. It seemed like all my interests prepared me for my future of long travels.

I have always found it interesting to explore new places and situations and to report about it on my website, by lectures, and by talking with locals. On my travels, I talk with locals and give them information about my way of life, since my philosophy includes not wasting things. I hope they understand and change their behaviors. I aim to change the popular attitude that humans are rulers of the planet and that we can do here whatever we want. Well, nature answers us with some signals. For example, I believe the COVID-2019 is one of them.

In 2004 I began with my travels. That year I tried traveling by hitchhiking and with a very small budget. On that first trip, I have been away from my home for 100 days. Since then I continuously traveled until now. I visited 34 countries (mostly in Asia) and spent there at sum 121 months (just 10 years). On average, I spent 3,5 months in each country (including Russia in which i travelled morethan 1 year at sum, but Turkey hold record — 1,5 year at sum). One learns a lot with that time in all new places and cultures. It’s an excellent way of opening your perspectives, testing yourself and practicing tolerance. 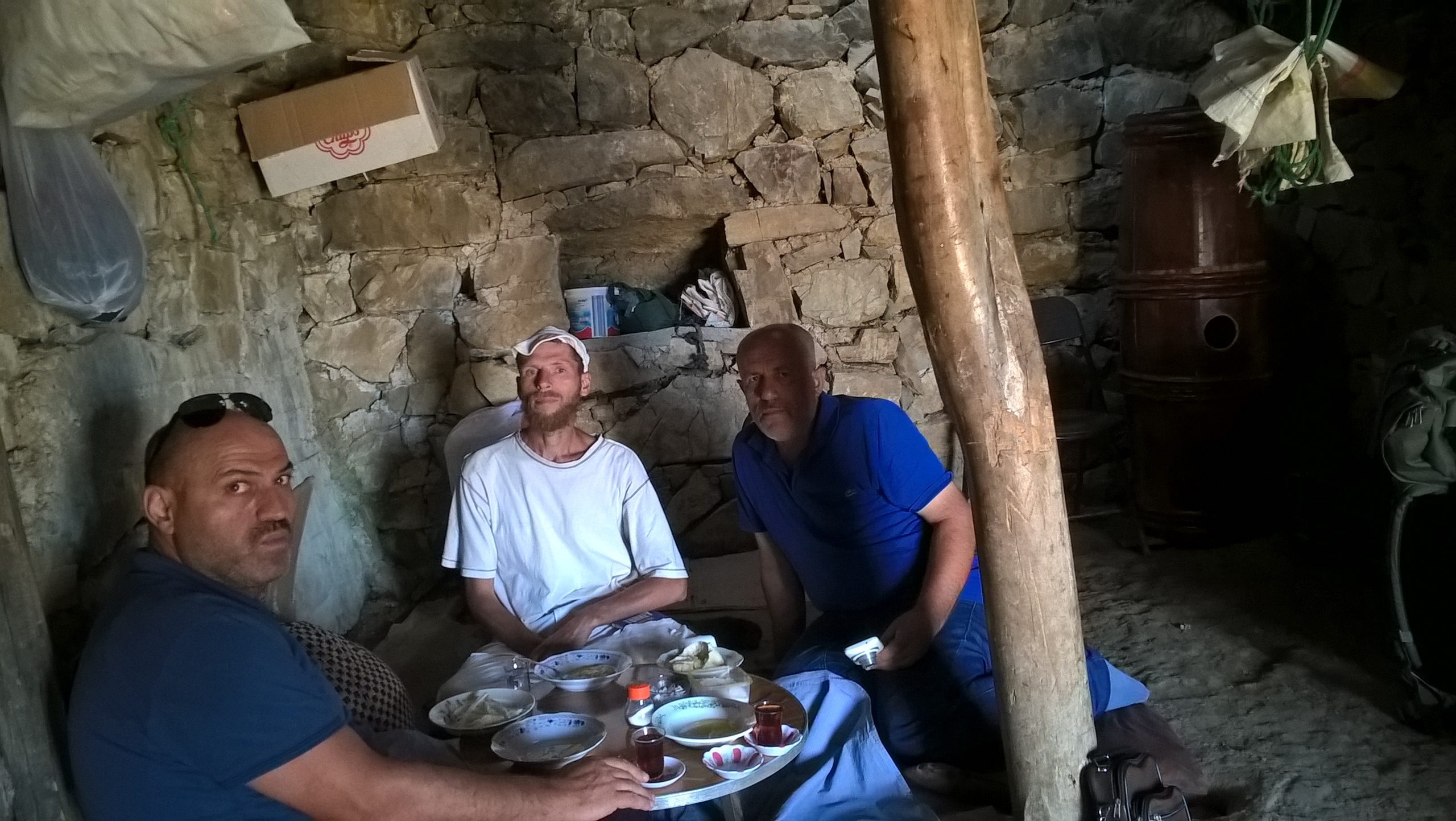 At this shepherd house i has a lunch by inviting owner. At Turkey, height of 2200 meters.

In 2016, I started giving lectures in cities of Russia focusing on other countries and what I had learned. Also in 2016 I created this website (mostly on the Russian language) about my travels and my experience: https://takliono.ru/. There is also a small section in English (which you read now).
Because I travel with just a sleeping bag without a tent (and without money for the hotel) I need a place to stay for each night on the trip. I solve these problems thanks to many different methods. I find shelter at churches, monasteries, mosques, buddist temples, and areas of other religions.
Another useful resource is the Couchsurfing website whish using by many travelers and hospitable people for cultural and informational exchange (but at 2020 users should pay money).

With a little bit of resourcefulness and a lot of determination, there are not many limits that stand in your way to adopt a certain lifestyle. In my case it’s traveling. I am so deeply in love with it that, who knows, I might just expand my mission to Mars soon, with the way things are developing.

However, all jokes aside, there have been extremely difficult moments. Many times I slept at abandoned houses or just under the sky (if warm weather and no rain). Sometimes I would stay in the fire stations, stadiums, and simpler places like a coffee shops, hairdresser’s or tattoo salons. This type of traveling is a bit wild, I have to admit, not for everyone’s taste. I explain this way of surviving in wild traveling conditions on my website. 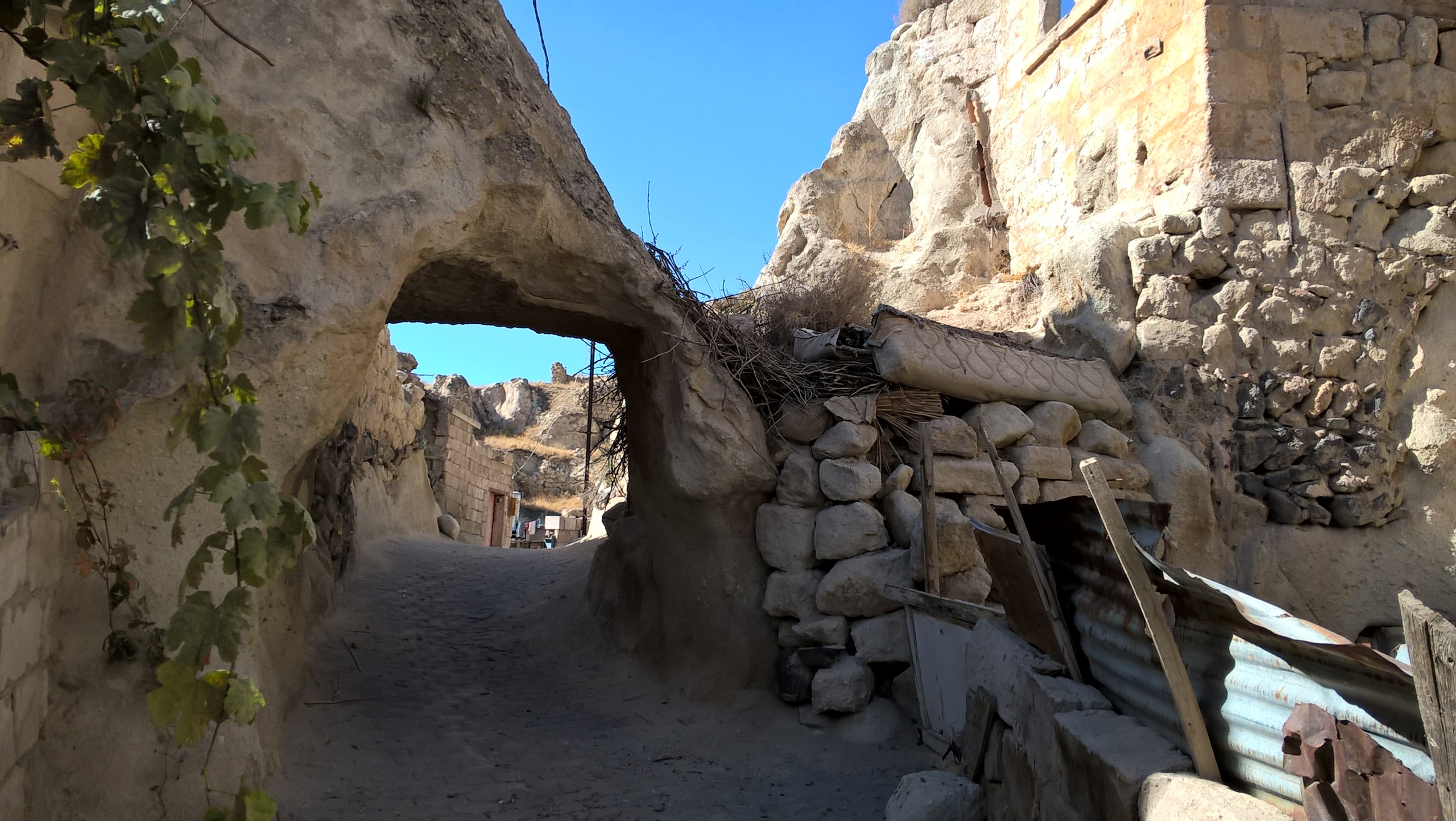 It’s not so easy to live at this lifestyle but usually healthier. It’s Capapdocia (at central Turkey) — unique region with fantastic landscapes.

What is the most beautiful

Year by year I prefer to research natural places and high mountains more and more. In the first years of my travels I spent most of the time in the cities and interesting villages. Lately, though, the sounds from nature and mountains became much nicer and attarctive for me. For example, in 2017 to 2019 I spent more time in walking than hitchhiking (maybe 20-30 times more!), so I can enjoy the nature more. Sometimes I just walk along the highway without wishing to stop the car because the surrounding landscape is so amazing.

I climbed a lot of peaks higher than 3000 meters. This fascination with hights motivated me to connquer almost a thousand peaks, most of them at Caucasus & Turkey. I managed to do that sometime by visiting the nearby peaks on the same day. I hiked many lower mountains as well (sometimes they are as well very beautiful). For example in the Balkans, the highest mountain peaks are 2900 meters high, but there are many at around 2500 meters. 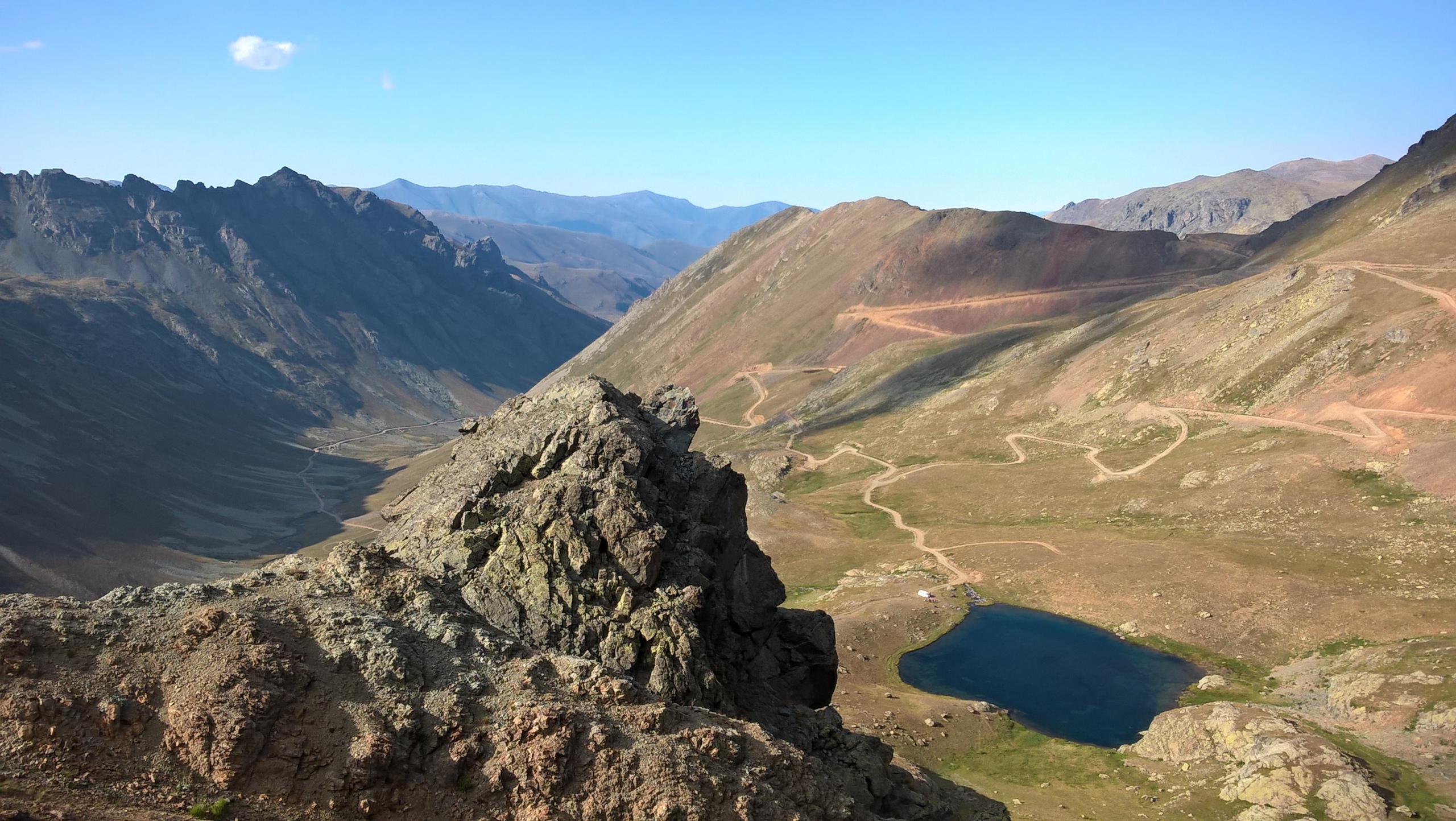 Photo taken above the Anzer pasture which nearby Kackar mountains (the most attractve mountains at Turkey).

Unusual landscapes and strange geoformations are especially exciting to see. For example, huge territory of Cappadocia in Turkey and the sanctuary of Wadi Rum in Jordan are the most beautiful territories for me. I have never seen anything like these before. Of course, high mountains as well are very beautiful but one needs to spend energy and time to reach that beauty.

In 2010 I returned to my home after 4 winters without snow. And then I began to appreciate unusual images of snow: how it falls on trees, sits on the roofs of houses, and other objects. Life in a cold climate is difficult and it takes the energy out of a person. However, there is a positive side to it. People in hot climates cannot whitness the beauty of snow, unless they watch it on videos or TV. In a way, my travels have allowed me to appreciate both — the beauty of the far away places and everyday simple things of my life in Russia.

In my humble opinion, there is a beauty all around us, that we fail to appreciate enough. Any so called bad situation may hold some benefits. We just need to change our perspective and try to look at it from an alternative position. 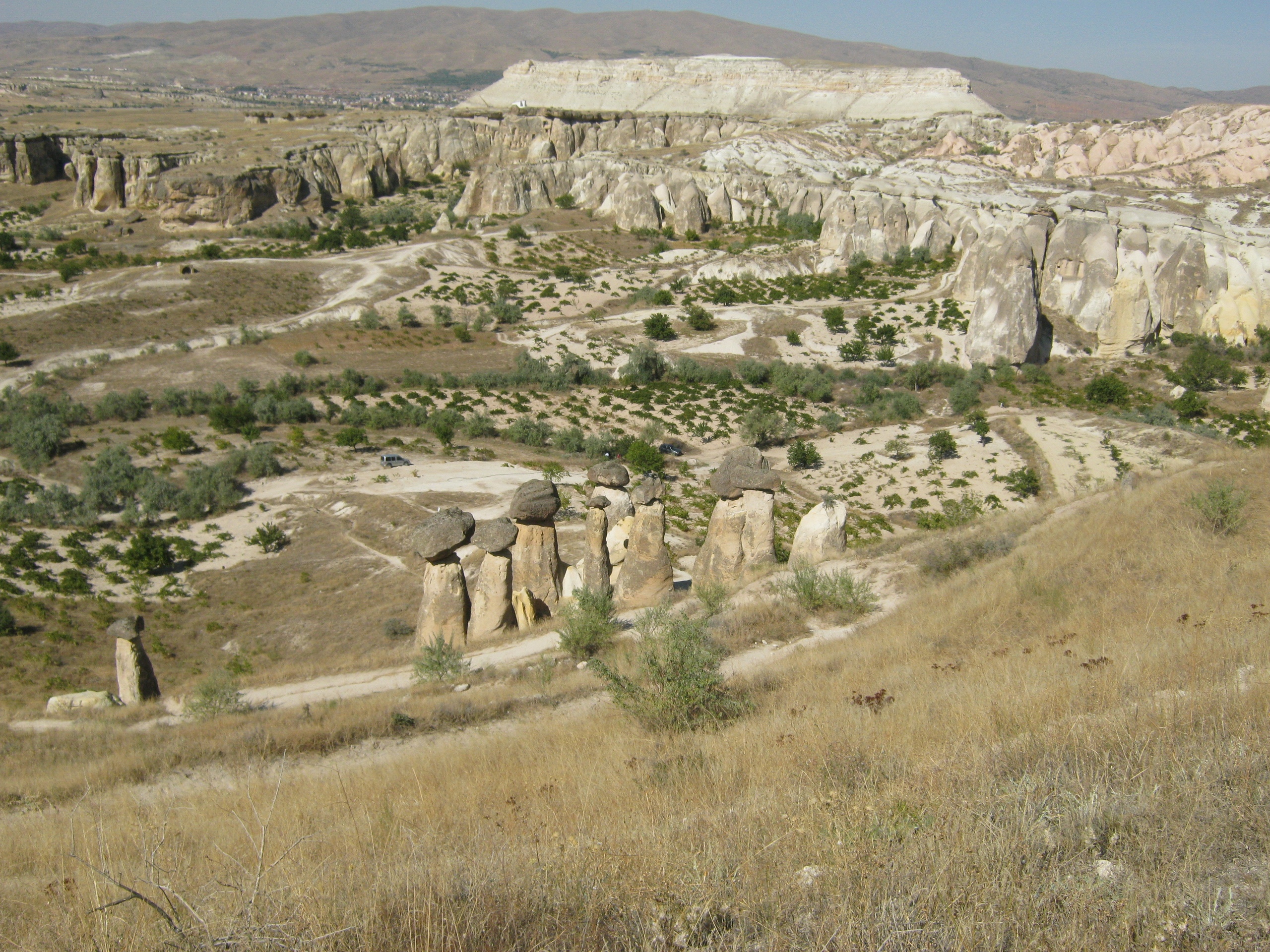 Another photo from Cappadocia. At center of picture — grapes garden, which are very helpful for stranger to walk around this amazing territory full of stony pillars, «mushrooms» (examples of which presents in the front) and other differnet assortment.

View from other side

As you can imagine, a person who travels for so long, in such a free and wild manner, witnesses many not so favorable situations and sights. These are also part of the process and this negative side of things is actually the one that brings as much value in the learning process as anything beautiful does.

I have witnessed local conflicts, I’ve been very close to dangerous situations.
Many times I’ve been personally checked by police and army. I’ve met people in difficult life circumstances and seen people doing good and bad things. The nature I adore was so many times treated horribly in front of my eyes, desecrated by our lifestyles, by the garbage we compile. I have had the opportunity to learn about life and people in a unique way with many different perspectives.
I have learned from it. It all comes down to choices: to focus on solutions or continue down the egoistic human path.

Life holds all the colors, even the white has a bit of black in it, and the black has a bit of white. We must balance it well. We must start taking the problems and looking for their solutions, at least one by one. We must decrease the occurrence of negative actions. At least one by one. The world will not disappear, the life won’t either. I believe there is a chance for reincarnation. However it is our duty not to let this world fall apart just like that. It is our obligation towards our current form of existence. 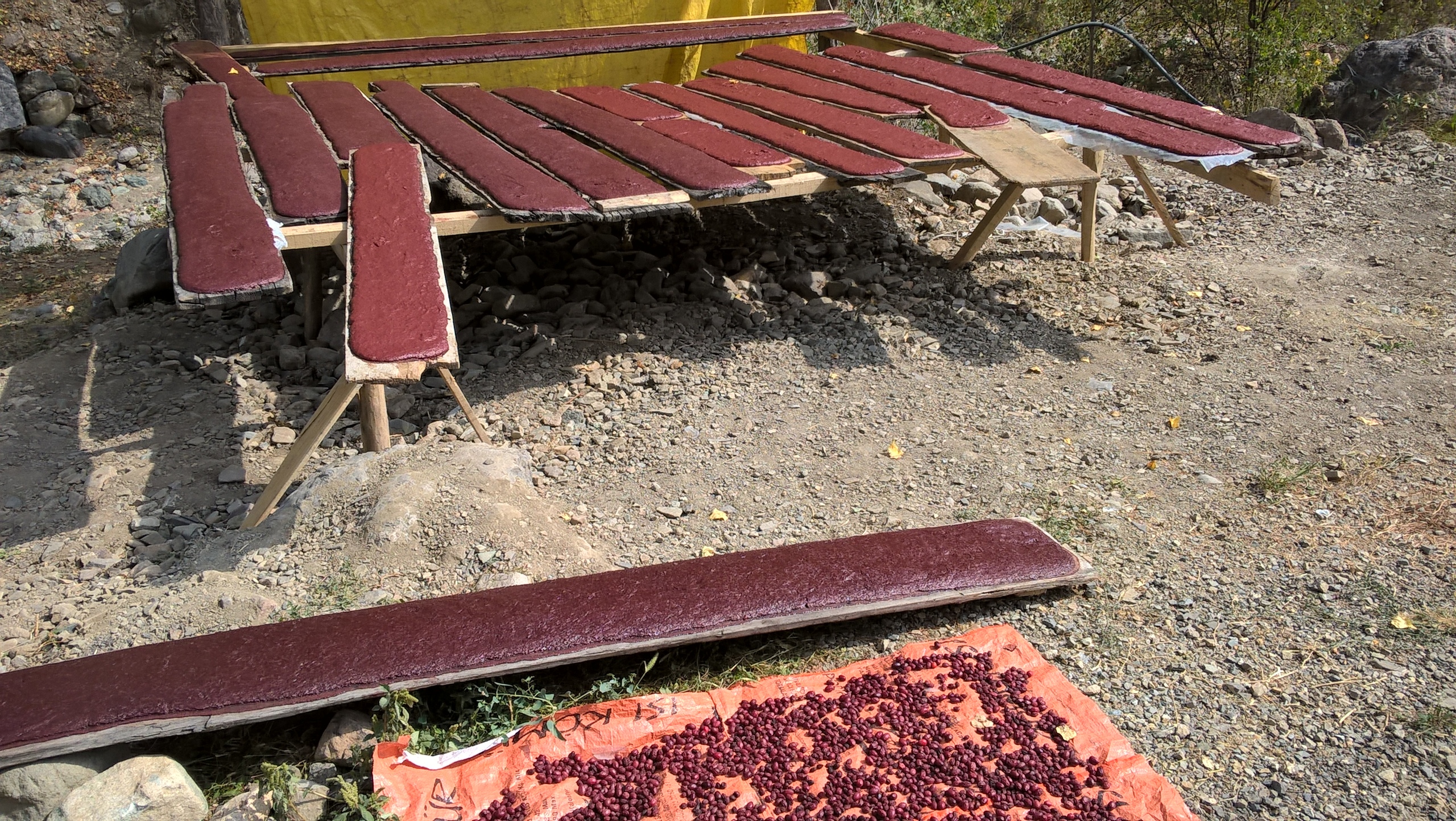 Drying paste from dogwood (red sour berry) at turkish village. Because it’s far from highways and cities, this product come out very clean and tasty.

Even if we start small, it’s still better than not starting at all. As an individual, I am trying to change towards a better lifestyle. I don’t want to pollute our common home and prefer to clean it by collecting products, that are good enough to be used, although people throw them out. As much as possible I stay away from cigarettes, alcohol, narcotics, air pollution. I also try to promote the importance of reducing the acts of the ego. With the lesser influence of the ego, the world will be cleaner and nicer.

I don’t call life only that which exists in the biological forms. Instead, I look deeper into things. I find that anything that can imagine, anything that can be imagined, anything that can go through a change, belongs to life. Even stones, because they change in time, hold life, in my vision. That’s why it all deserves respect.

I found a lot of things on my journeys and there are many things I’m still looking for. In my vision, there is not a goal or an aim to arrive to, to achieve. The way itself includes many interesting things. Any of those has the power to change your previous destination and that’s what it’s all about. The potential to change and the change itself.

My plans for future are not really there. I will probably finish my travels just next month. I don’t have a fixed plan for life. Trying to live at the moment «here and now».

All other my texts can find at english section.