A previous part of my iranian trip was here.

From Bam city i moved on the East 350 km to Zahedan (on the way i stopped and have seen interesting landscape named Kelut — it’s small Kelut, not that big Kelut which North of Shahdad, but as well nice place).

Checking by police at Zahedan

* Zahedan. It’s capital of Sistan & Beljistan province. Most secure area in Iran!. I stayed here 2 nights at house of CS members. Between that nights i visit city and tryed to climb to small mount which are the nearest to city center.

So when i try to start climb two policemens (they drived the car) have seen me and call me. Then we come to each other. They request me show passport. After that policemens brought me to post of police (together with army) which 10 km from city center.

That post are the main check point on the way from Zahedan to West. They check me 3 hours. And all my bag also. And photo camera. And they don’t know about that i stay at CS house. They ask me (they almost don’t know english) — «You at Hotel??»
Of cource i say «Yes». Because if they know i stay at house it’s can will be some troubles for them and me. And it may take more time.

Policemens finally say «In this area climb to mountains very dangerous and not allowed!! Especially for foreignes! You can’t climb to mountains in this province of Sistan And Baludjistan!!!»
So after 3 hours of checking and talks process finished and police brought me back to city center.
Next mourning on the way to south at another check point on the main road i have been checked again. But it’s take 20 minutes because they call to main office and receive calming info about my person. 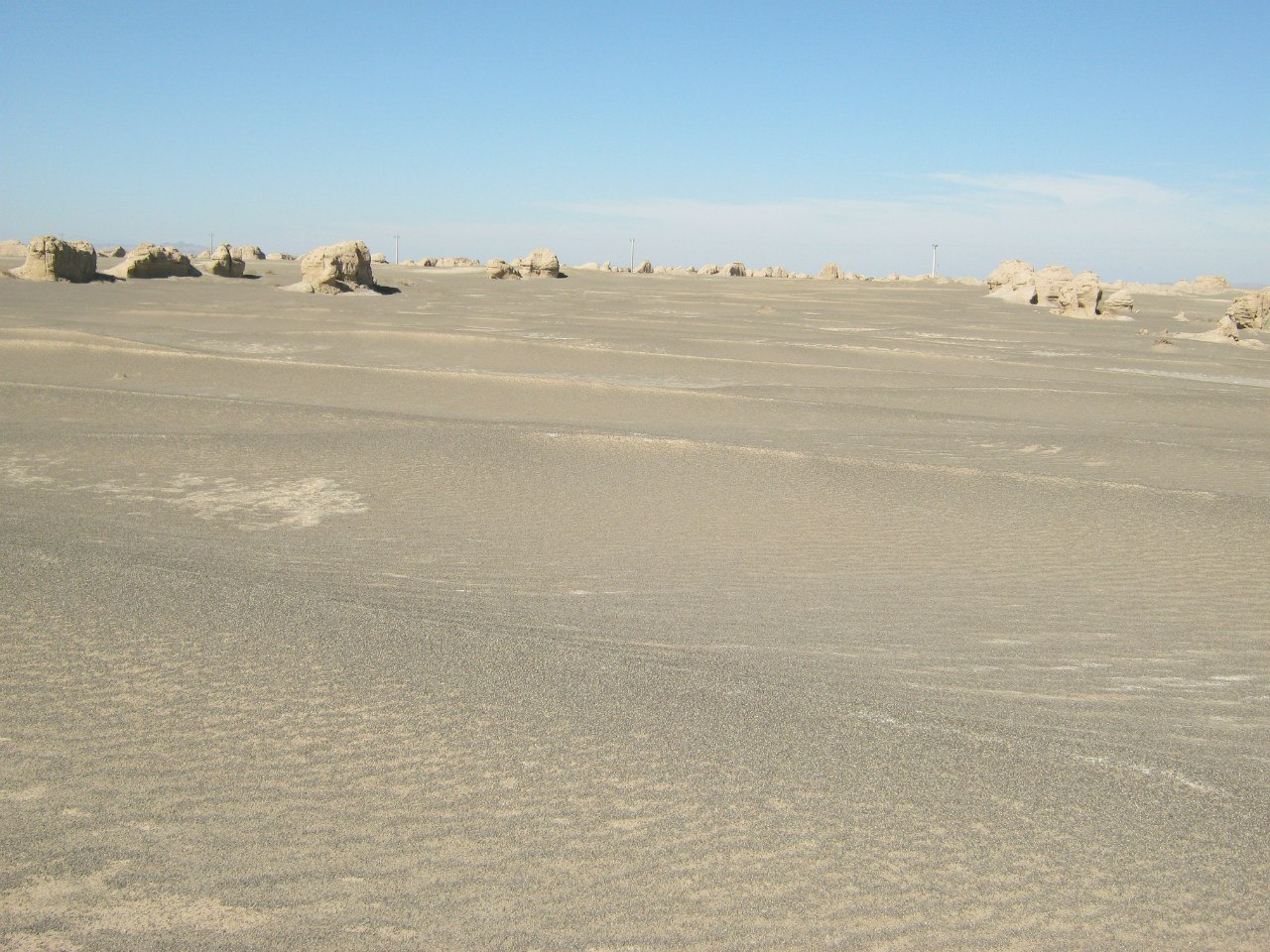 About this unusual landscape i mentioned at the beginning of this page. It’s on the way from Bam town to Zahedan. But on the way to Iranshahr tjere is only normal type’s views of the desert.

* Iranshahr. It is like an old capital of Baloch (or Baluch) peoples area. Population of city is 120 000. There is a walls of former square residence of locals powerful peoples. At Iranshahr i stayed one night in hotel. Owner allow me it for free… But in the mourning he bring my passport an myself on his var to police station for reporting — because foreign and this area very secure!

More details of this my adventure at Belujistan i explain at page on russian language.

Continue. On the West 300 km… *Jiroft. Stay here only 1 night and continued move to West via mountains another 300 km… 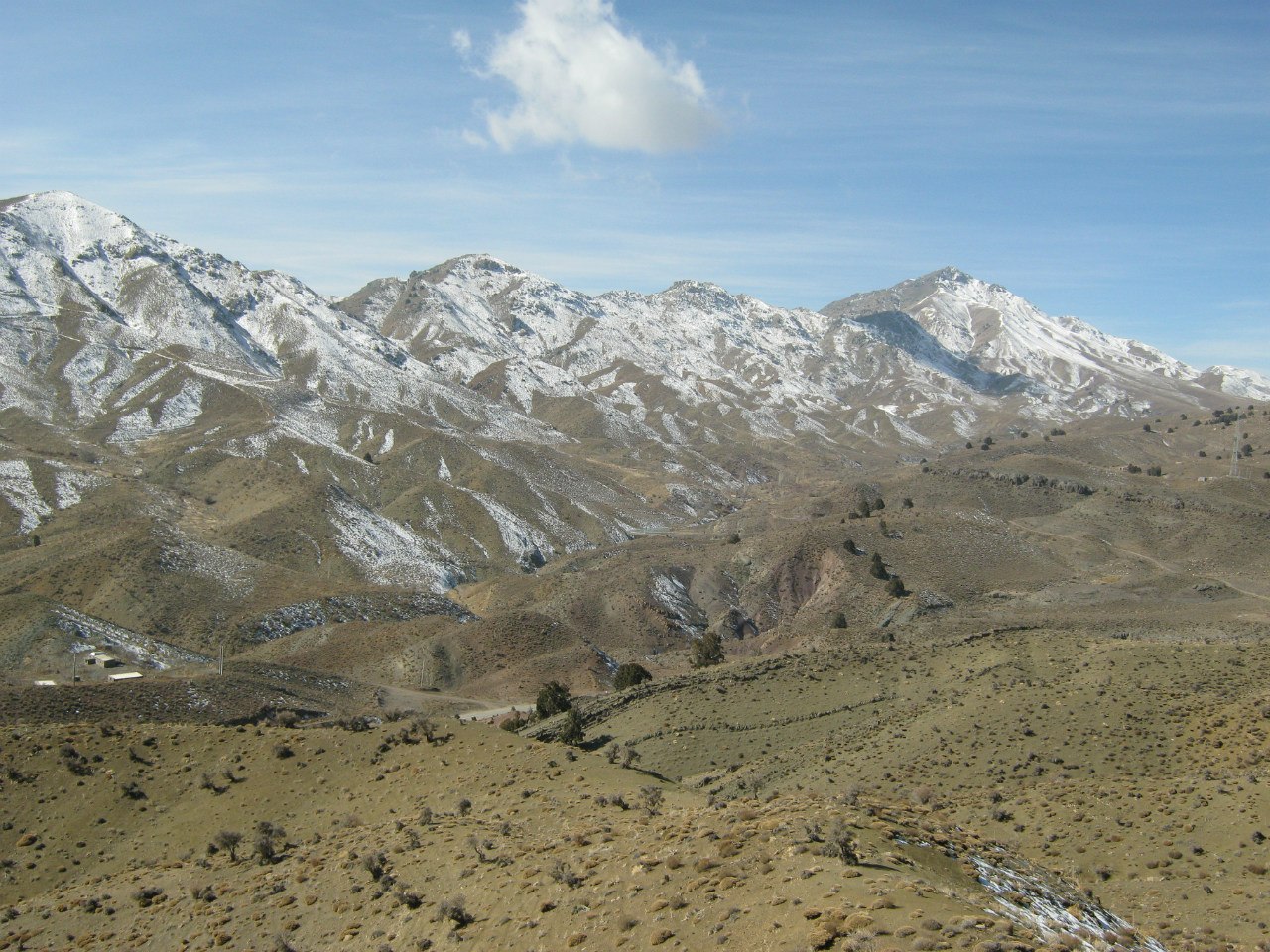 On the way from Jiroft to Sirjan. Because it’s not low mountains (and about 2000meters of height) sometime there is can watch snow.

* Sirjan. Stay here 2 nights because have been rainy. Not many interesting objects in this town but one badgir are amazing and enough unique. And visited also smal local musem…

The most dissolute iranian city

* Shiraz. The capital of Fars province. Fars it means persian! And iranian language named farsi!
In this city i spent at sum ​6 nights and 4 full days (plus i have been also 2 days around Persepolis). Here i extend visa again for one month more. One day spent for nearest mountains at Shiraz city.

Also i stay here 4 nights at house of gay (homosexual!!!). He is member of couchsurfing and invite me to house by e-mail (after my request).
First 2 hours we meet with his friends at them office. They drink alcohol!!. But because i don’t drink they provide me computer with internet and i spent all 2 hours at this device.
After that 2 hours i just seen — they all are gays!!!. It was very very surprising!!

I not have another option for free stay and agree to that gay’s home. He live alone. When we came to home first about 2 hours gay show me his sympathy for me.
But i was strong!! And we remain with ours position. He allow me to stay some more than 1 night. And summary i stay at his house 4 nights (2 before and 2 after my visiting Persepolis).

Every next nights he brought to home new boy-friends. And drink alcohol with them and do some strange activities.
I can’t say «It’s was very difficult endure him activities…»
Not so difficult, but it was interesting and very unusual psychological experience!

And this iranian gay was also very hospitable (because he born and live in Iran) and help me as he can.

I can say — in Iran (even except Shiraz city) for 3 months i have seen about 15-20 gays — because i can recognize them by them activities.
And also another about 10 gays i have seen at Shiraz (during that 6 days). But before enter to Iran i don’t think there is possible to watch gays!!. But reality is some another thing.

So Shiraz is may be most homosexual city and most drunken city in Iran. And probably most poetic iranian city.

In russian language i wrote more about Shiraz. 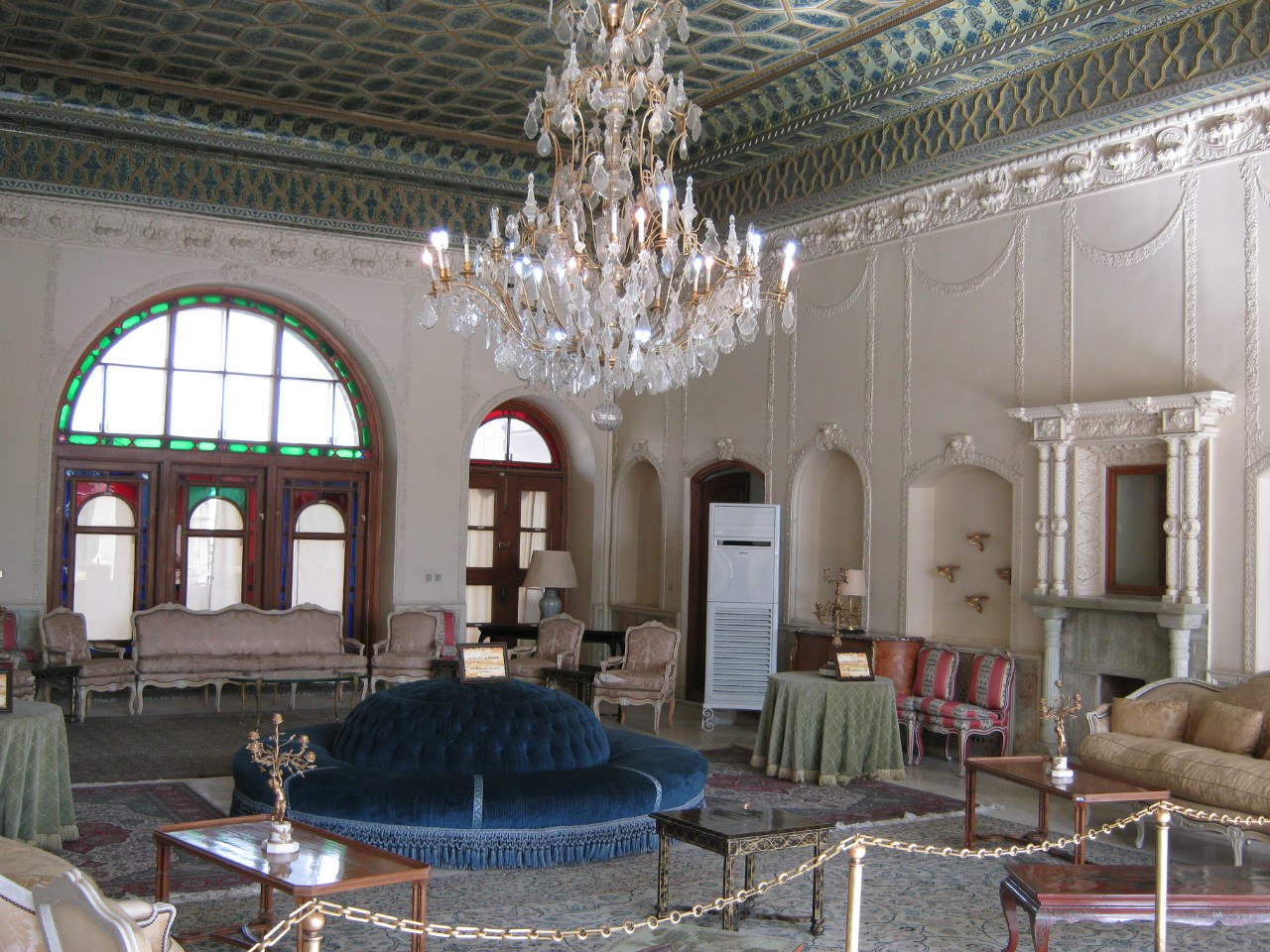 At Shiraz among interesting points there is as well this old Arif Abad palace of one of previous shahs.

One year ago in previous winter one my friend from Ukraine have been in Iran and he send me message like that «For 1 day at Shiraz city i have been invited to 3 several houses and everywhere there was alcohol on the table!».

And me also visit some another iranian cities where peoples drink alcohol in front of me. Or say me «We are drink many times!» or say «Some time we have alcohol at our home or at another aspecial storage.»
It was also very strange for me.

After Shiraz i move to…

* Persepolis. Ancient capital of Persia and one of most welknown cities of ancient world. I spent almost full day for visit it and surrounding area with Naksh-e Rostam (tombs of kings of that historical period).
And also another day i climb to mountains near Persepolis. After that come back to Shiraz and that house of hospitable gay. 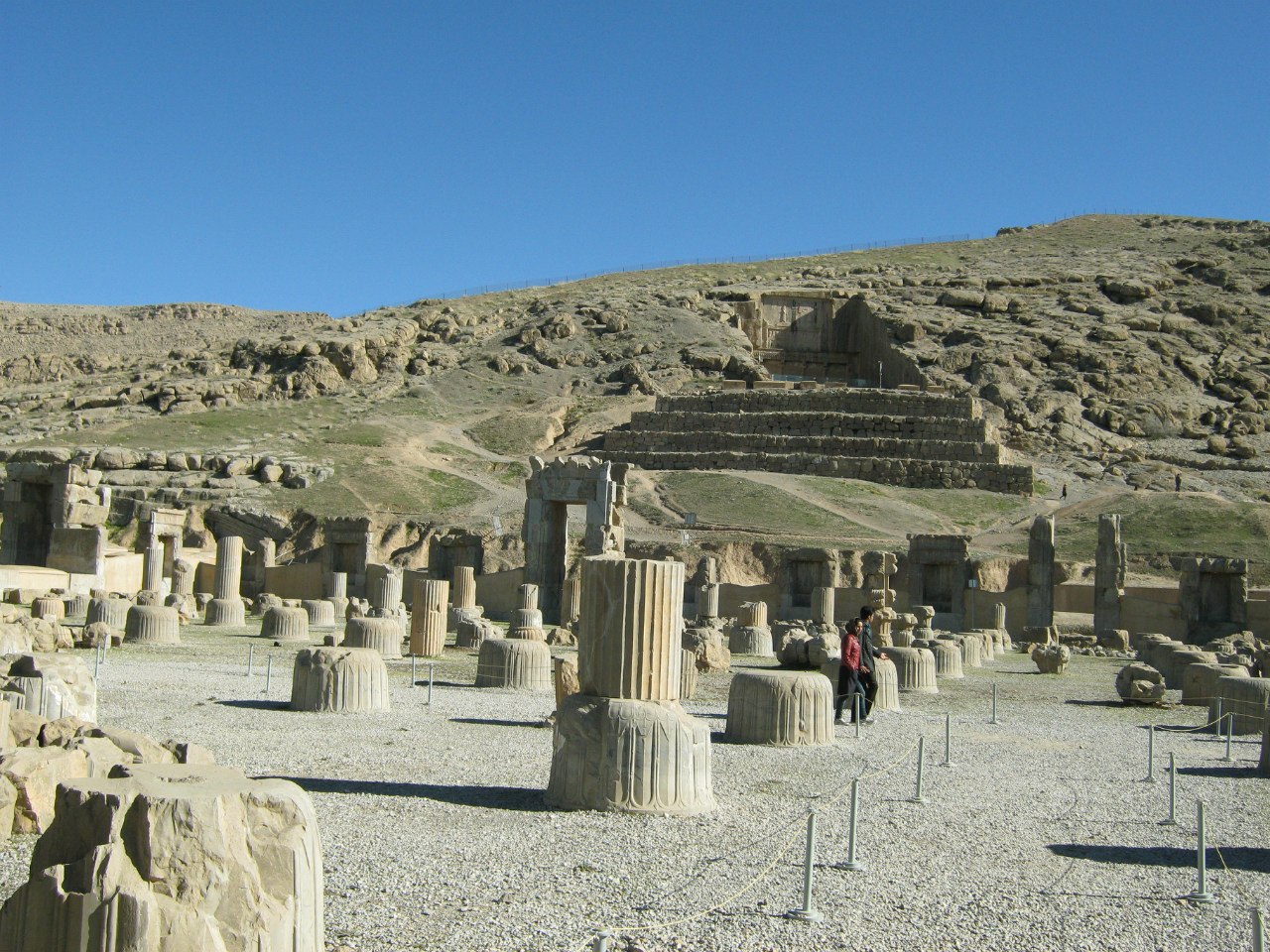 A small part of the Persepolis. At middle of picture there is a tomb carved in the rock.

And as well available my page on russian about this ancient objects of Fars province and about my iranian visa’s extension.

Firuzabad. And stay here 1 night. After to S-E 250 km…
Lar. I stay here 2 nights and between them one full day spent for mountains around. Here (as well in Firuzabad) available some old subjects but not so much.

250 km to East (on the way visit some strange landscapes)…

Links to all another my texts in english is here.