I traveled around Iran for 90 days non-stop. And 2 times i extend visa (each extension was for 30 days). Both extensions was not so difficult and took about 3-5 hours in each case (if come there at mourning).

Well in Iran my trip was by route via that settlements (some time i can forget some small villages & towns which i visit on the way, and some mountains and landscapes):

* Tabriz city (i spent at this interesting old city 2,5 days). It’s capital of province of eastern Azerbaijan and whole so called iranian Azerbaijan (this link lead to my page on russian language). I visit few museums, many old mosques and other attractive structures. As well at Tabriz there is biggest old iranian bazaar (and of course still using now!) inside which i been about 1-2 hours. It can compare with huge historical bazaar at hearth of old Istanbul. 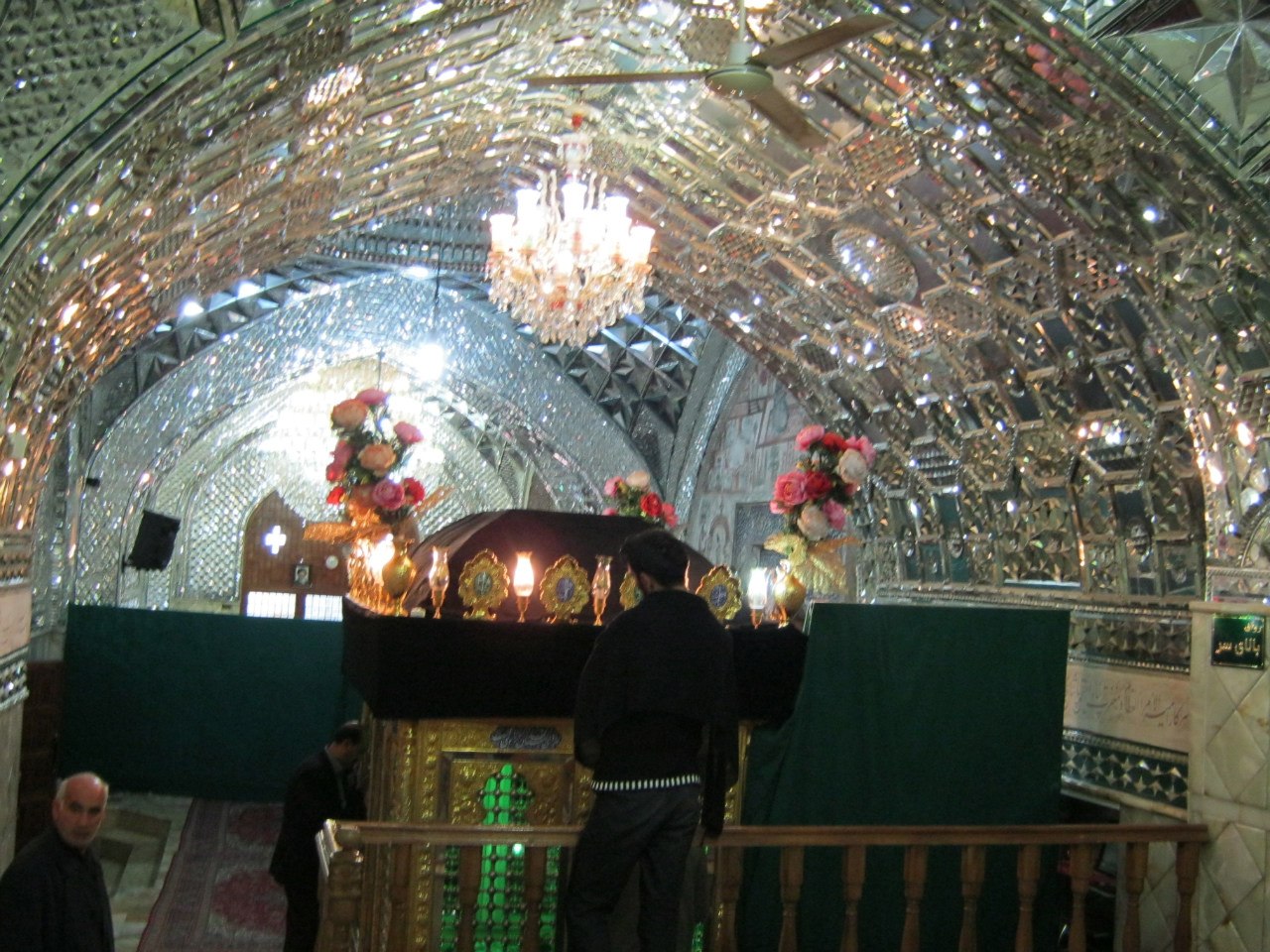 One of many imamzade (tombs of desendants of prophet Mohammed) at Tabriz and at Iran there is probably a thousand or more similar mausoleums withcolorful mirrors.

* Qazvin (1 day) — interesting old city but almost without tourists, and then i visit Tehran (the capital of Iran) where 2,5 days. About this two cities my page on russian language (and almost all of another links on this page will lead you to my russian pages of Iran). 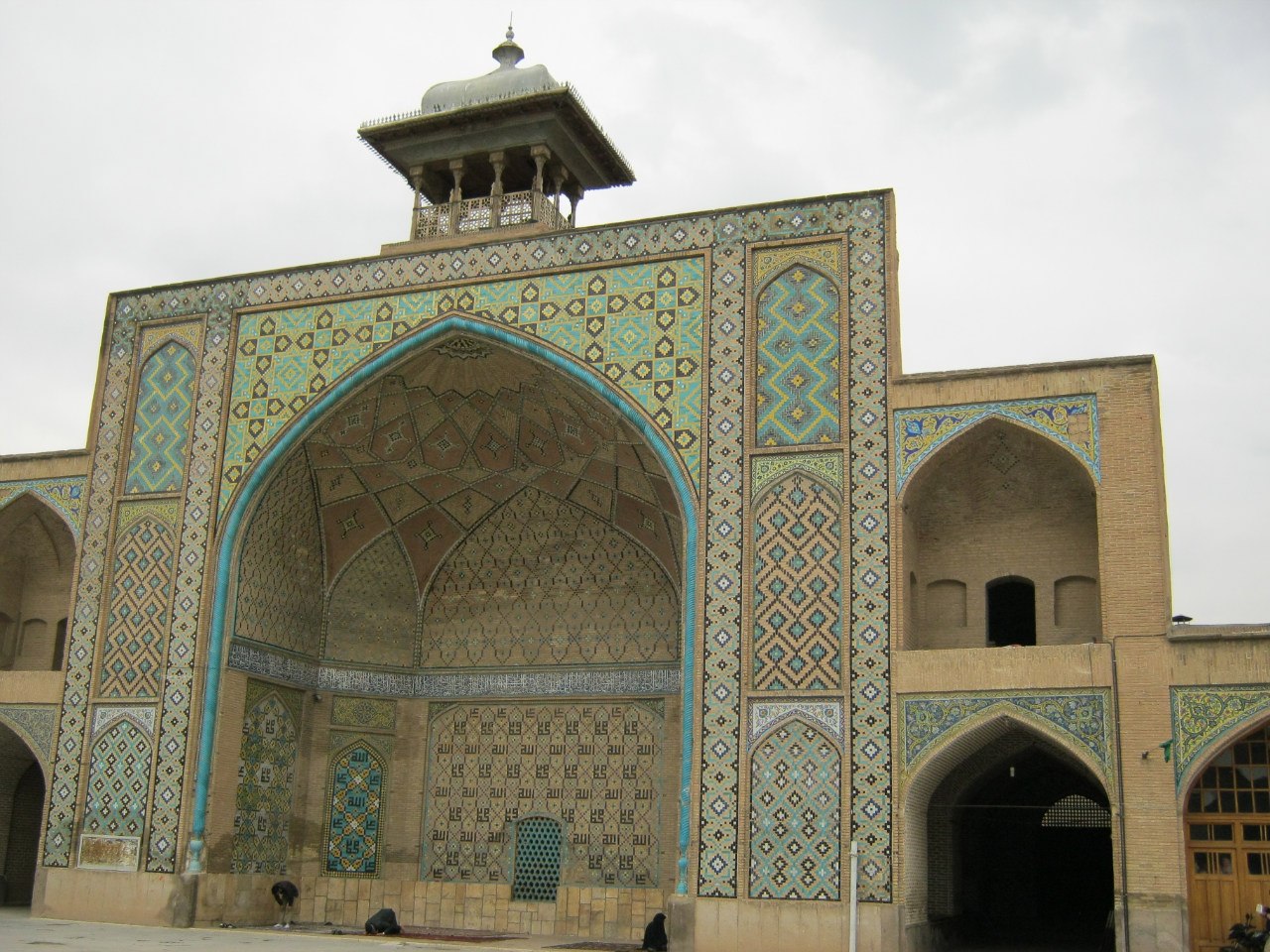 Old friday mowsque at Qazvin city. But it is just a small part of the mosque.

* Qom city. 5 days and 6 nights i spent at this city, the religious capital of Iran and maybe all shia muslims, which have a many disagreements with much bigger sunni muslims. I been there during amazing Asura festival (this a days dedicated to death of Ali Hussein, the founder of Shia branch of islam). Of course, at Iran as well live sunni muslims (they are mostly at Belujistan and Kordestan provinces, and at that areas they create a many problems for government, especially for police and army, and sometimes fight with them, but about that territories i wrote at the next page).

* Markazi ostan/province — 3-4 days i tarvelled around this ostan. Most of the cities here not so interesting. But natural landscapes was attarctive, especially hills and mountains close east from Delijan town (there is also Chal Nakhjir Cave). About Markazi ostan on russian language. 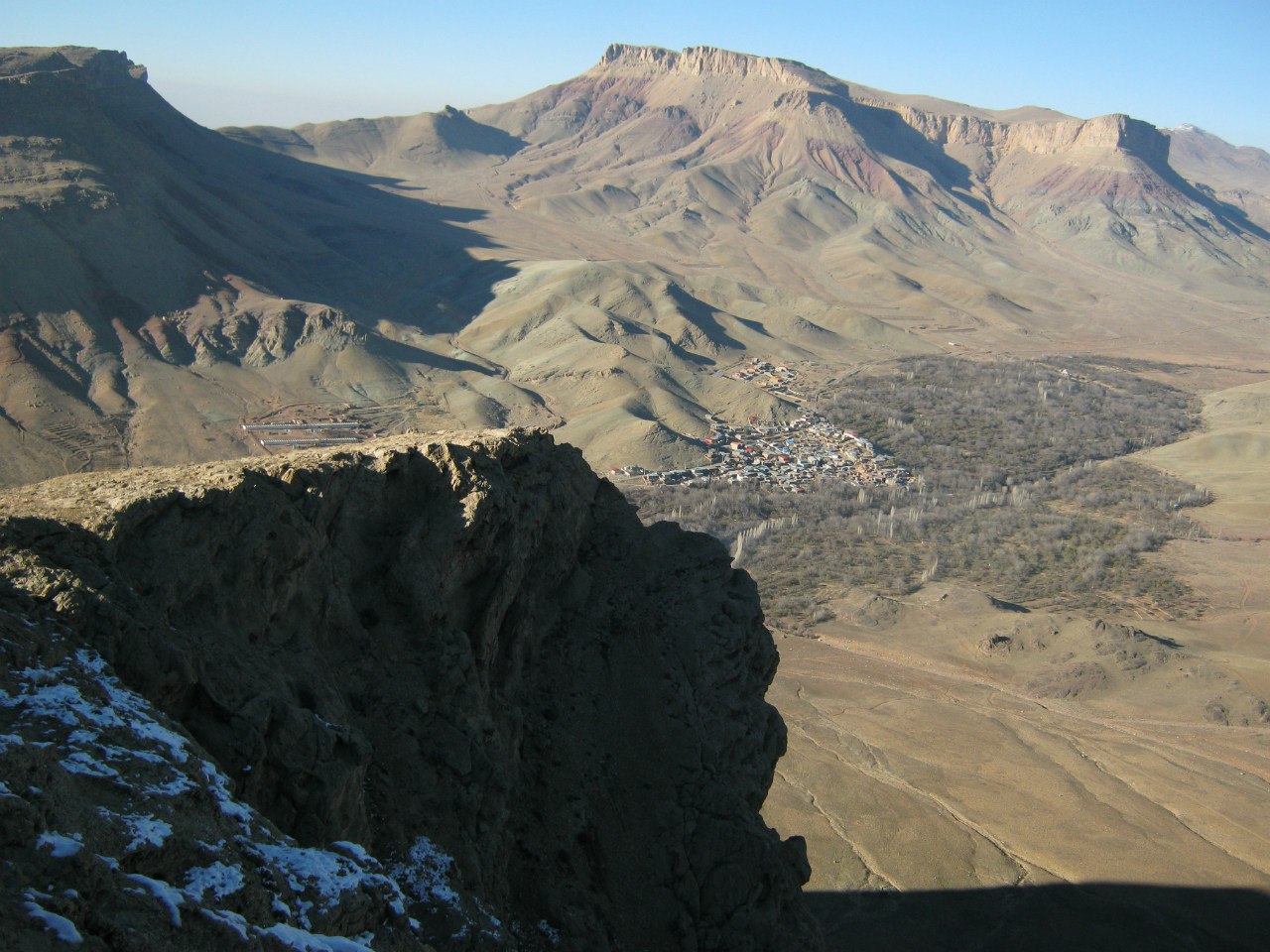 The mountains above the Chal Nakhjir Cave (from Delijan town to east) i found most beautiful. At center of photo there is small village.

From Delijan to the east 80 km…

* Kashan city (it’s North of Isfahan province), and at this district of Kashan i visit historical town of Naragh, one village (forged name) with big and important imamzade, Nıasar town with several historical interesting places, and Kashan town itself (which are full of historical two-storied mansions in which earlier lived rich local peoples but now used as small hotels, or mini-museums for tourists, or restaurants, or in some other purposes. 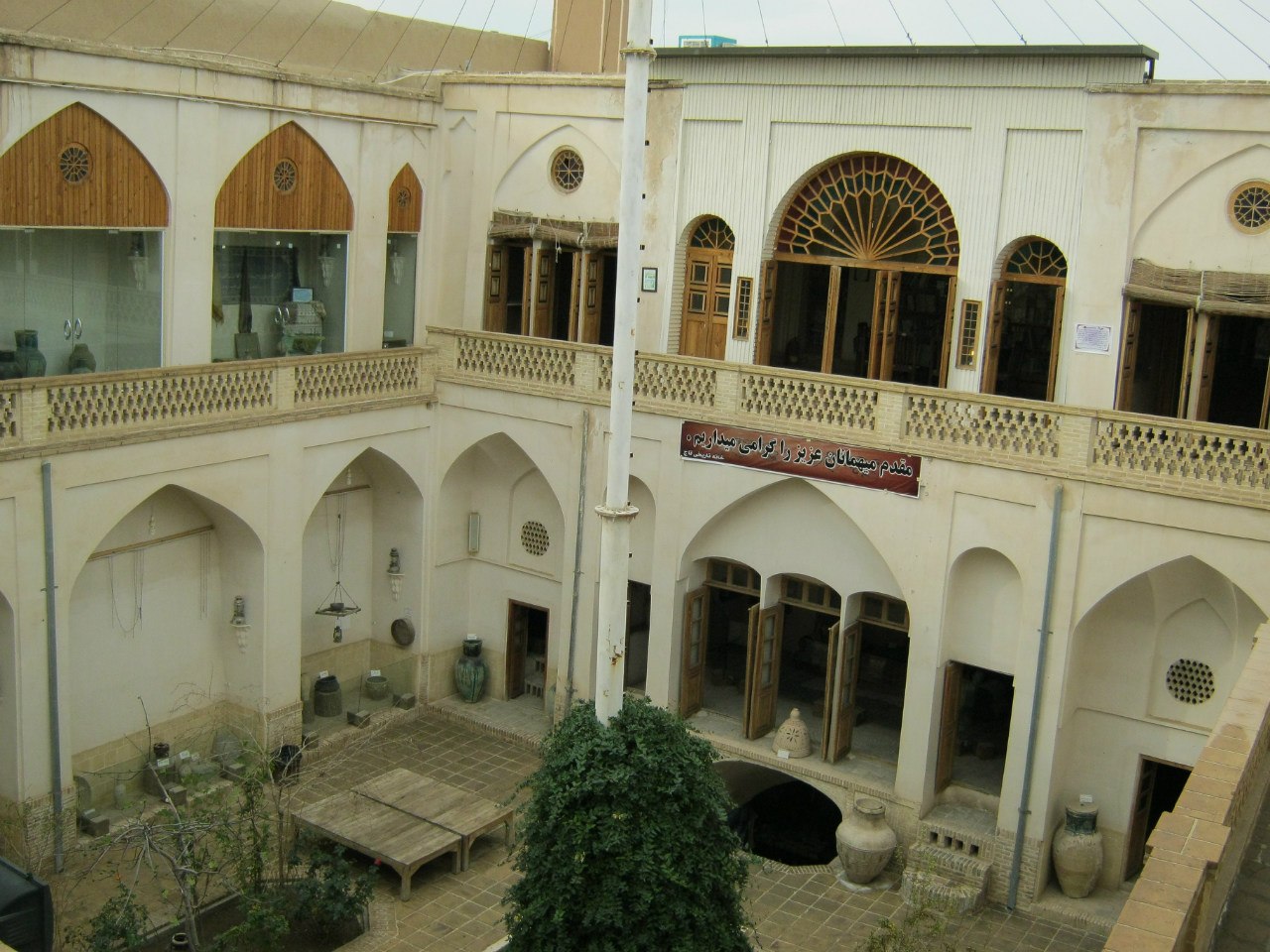 One of many old two-stored mansions at Kashan city.

* Isfahan city. I spent at this most interesting iranian city 7 days (record at Iran for me). Many interesting several different places, and Suffieh mount on the southern outskirts of the city.

And also 10 km to east from city by highway to Nain and Yazd (and 1 km from this road) — cluster of interesting big bird houses (about 12 pieces about 100 years old). It’s (i think so) not touristic object. About this place i never read in any broshur. 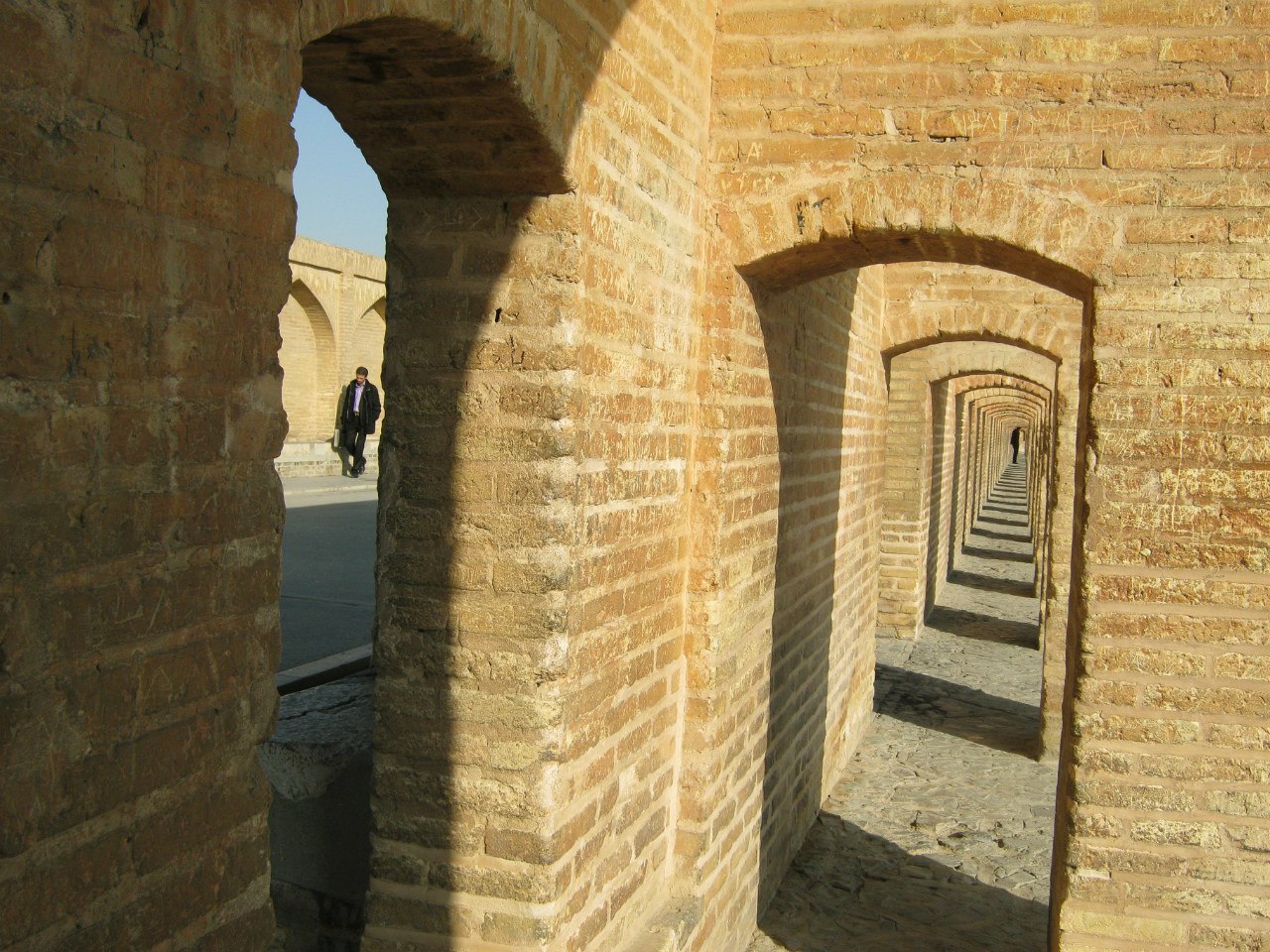 Most interesting old bridge at Isfahan city. It’s open just for walkers for save this historical construction.

* Na’in=Naeen. Small old city. 1 day for exploring. And near at 2 km i visited another old viliage Mohammadiye with similar amazing style. Also, about this part of Isfahan province (and as well about my visa extension) i explain here on russian language.

* Ardakan. Small old interesting city (at North of Yazd province) with narrow streets, funny houses and many badgirs (a special structures for catch the wind and use it for refreshing the house and make colder space inside. Spent there 1 day.
Nearby — at 10 km to S-E…
* Meybod. Similar city but more interesting and more several things. Almost full 2 days i walk around interesting places of this not so big town! 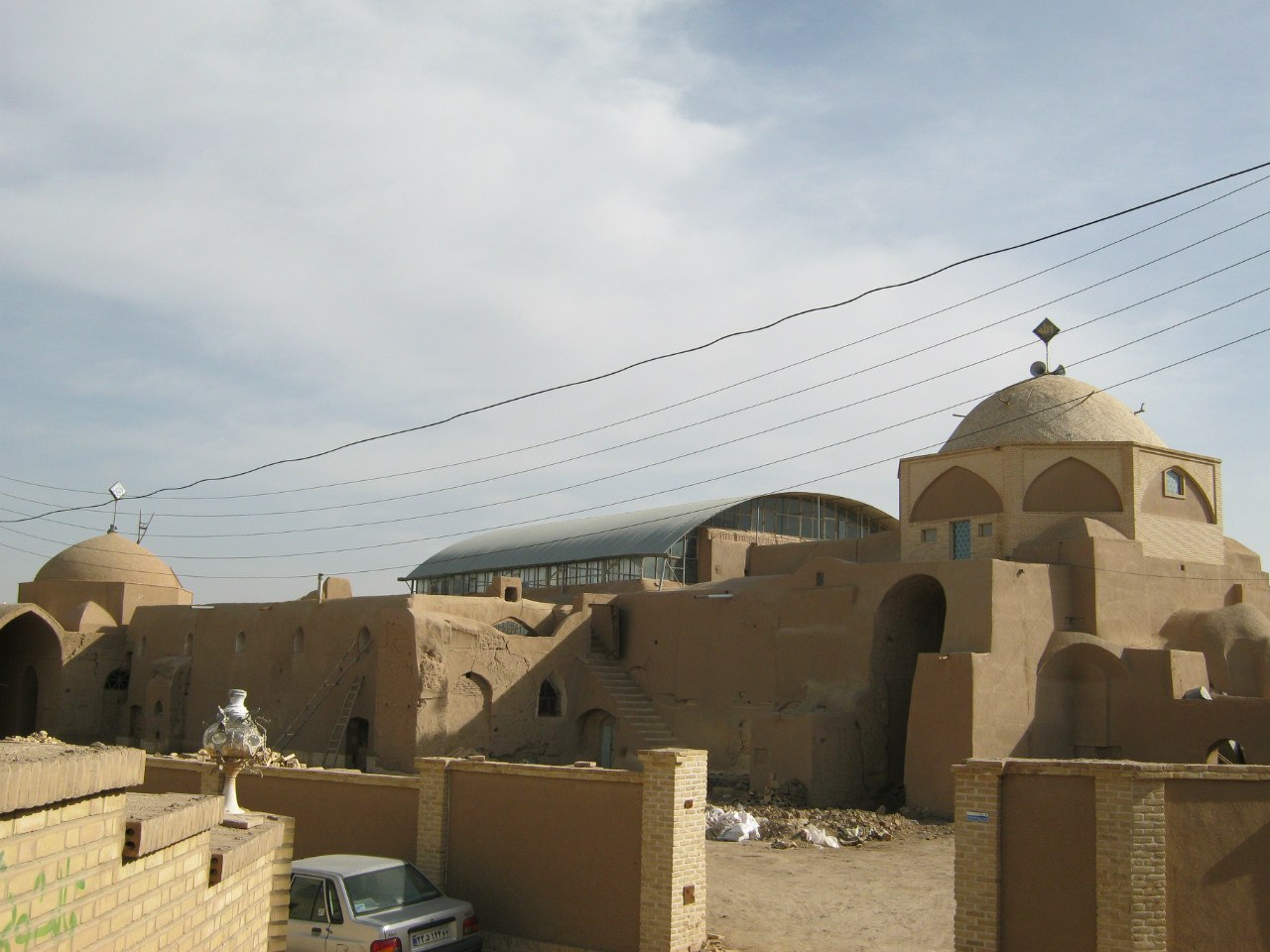 Old mosque at Meybod. Maded from the clay and bricks.

* Yazd (the capital of Yazd ostan). Here is very big and wonderful badgirs!!!. It was used at the houses of rich peoples. In Yazd city many historical mansions which early belonged to rich and powerful peoples (or maybe now some of them still belong to descendants). Many of that houses converted to guesthouses (small hotels).

No body in Yazd city invite me to house. I been here 5 days and slept all 5 nights at one guesthouse (converted from mansion) which are 300 years old. And i payed 1,5 $ for each night instead 3-4$ (it was exclusively for me). Including breakfast wich i prepare by myself (they allow me use kitchen) because i prefer some another food than normal modern peoples on this Planet. 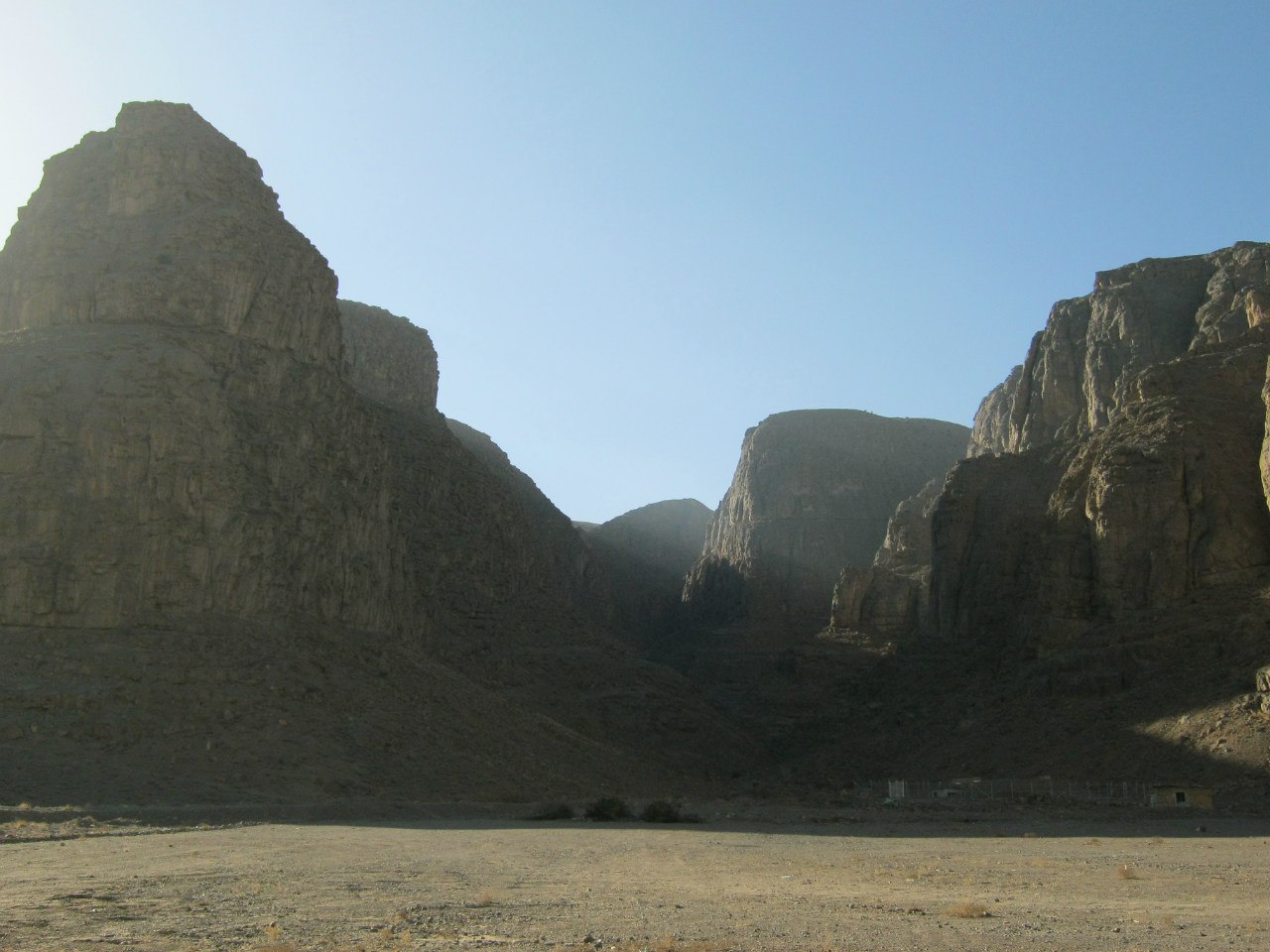 Two days i walked on this mountains nearby Qazd city. As well available my text about dangers and risks for mountain climbers.

Then i moved to the south-east (via Bafq and Ravar towns) 400 kms (on the way climbed on some hills).

* Kerman. It’s the capital of Kerman province. Not very much interesting city as Yazd or Isfahan. 1 day it’s enough to explore all historical monuments. But another day i spent for local mountains (on eastern outskirts of the city).

* Mahan town (30 km to South). Most attractive obJect here it’s Mausoleum of Shah Nimatullah Vali, the founder of his own sufi way (tarikat). As well he respected by sunni muslims as a saint. At this complex also museum… Also, on southern outskirts of the city welknown historical Shahzade garden with fountain water for which going from nearest mountain. 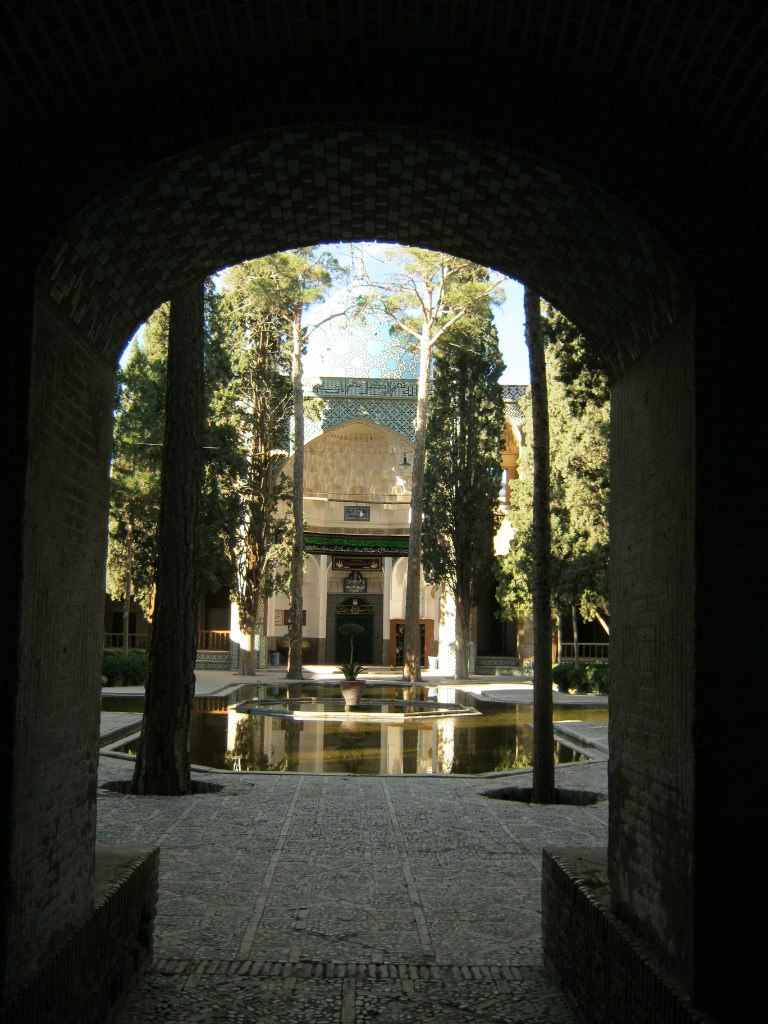 At the entarnce to courtyard of the Mausoleum of Shah Nimatullah Vali.

* Bam. There is welknown citadel and old town within fort walls. But it was damaged by earthquake 8 years before my visit and now just little bit renovated. But seems still interesting and picturesque.

In the next page i will report about most secure iranian province, most drunked ans most homosexaul iranian city and some other interesting things of amazing country of Iran.